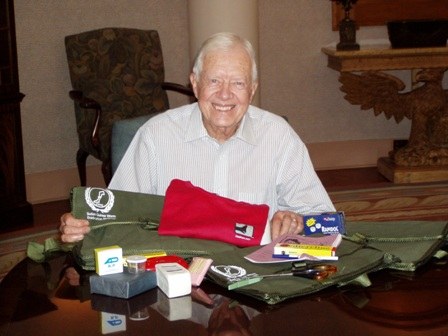 The Medical Students Humanitarian Action Campaign in 2003 made it possible for HDI and its partners to supply all of Sudan’s accessible endemic villages with medical kits for bandaging the guinea worm sores, even though there was a war going on.

That helped interrupt Guinea Worm transmission much more quickly than otherwise would have occurred.

A nationally known artist, Ida Lorentzen, donated a picture that the students auctioned. And donations were solicited from the whole medical community through the Journal of the Norwegian Medical Association.

The students also held concerts, put on a cabaret theatre production, went door to door in each of the four cities, solicited donations at Norway’s premier soccer games, had outdoor and indoor stands in Norway’s main cities and in shopping malls featuring humorous as well as informative elements including “throw wet sponges” at white-coated medical students and face-painting events for kids, “Teddy Bear Hospitals,” etc.

This bought 7,000 medical kits, one for each guinea worm volunteer in every accessible village on both sides of Sudan’s civil war, with an additional 424,350 pipe filters and a full complement of medical kit refills in 2005.