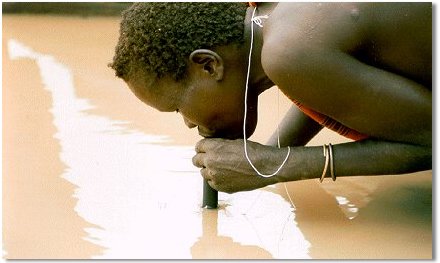 The civil war in Sudan resulted in so many people not living in households, continually displaced, and without access to even simple water jugs that would allow the standard household filters to be used – filters that protect against Guinea worm when drinking stagnant surface water.  Many of these nomadic and displaced people have holes in their pockets, no pockets, or even no clothing at all, so expecting them to carry water jugs and use household filters would be rather less than realistic.

HDI enlisted the support of the petrochemicals division of Norsk Hydro (including employees and their unions, and company administration) to donate more than 1,740 km. of PVC piping, enough to produce an individual pipe filters for every man, woman and child on both sides of the battle lines in southern Sudan, the tool they need to adequately protect themselves against Guinea worm disease.  HDI contributed the 9 million pieces of filter cloth and the 9 million meters of string to allow each filter to be hung around the neck like a necklace. The Carter Center contributed 9 million printed instructions, to allow even those unable to read to see how to use their filter.

These components, combined with a 5 million Norwegian Kroner (approx. $550,000) donation by Norway’s Ministry of Foreign Affairs, together with great efforts by all our suppliers, and truly enormous efforts by Norwegian Church Aid, The Carter Center, and 1,300 refugees and other poor people in Nairobi, made it possible to manufacture the components and assemble them into more than 9 million personal water filters against Guinea worm disease.

Few believed that such an achievement was possible in a troubled developing country, but HDI and its partners made it happen in less than four months from start to finish. That the project was completed so quickly was important because the pipe filters needed to be distributed to people in endemic areas before the worst of the rainy season marked the beginning of peak transmission season, and the impossibility of travel in large parts of southern Sudan for months on end. This massive distribution effort was accomplished thanks to the collaborative efforts of more than 40 agencies and organizations, as well as the government of Sudan.